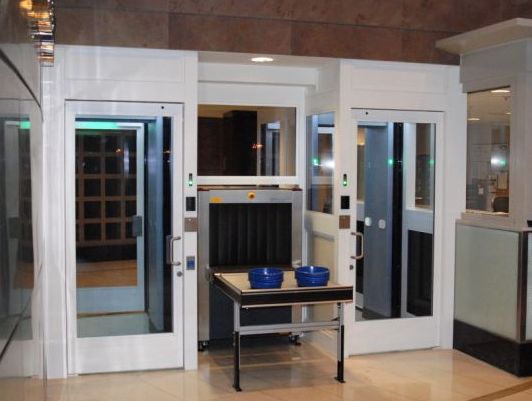 Working in partnership with Syntech Solutions, Astrophysics has fully integrated AI into their XIS 6040 X-ray machine. When it comes to weapons search, Artificial Intelligence integrated into weapons detection platforms will most certainly become a force multiplier.

According to a 2018 study by Microsoft, the average human being now has an attention span of eight seconds. No matter how well trained or diligent, even the best operator’s capabilities degrade with respect to focus and staying alert while trying to identify threats. This is exactly what most assailants count on to perpetrate violent acts.

Stress, eye strain, and mental fatigue resulting in identification failures by personnel monitoring x-ray screens. Lapses in security due to inattention or loss of focus are well documented. These cumulative factors and other environmental variables degrade security personnel’s attention span while staring at a screen for even limited amounts of time. What’s more, researchers have evidence that light from computer screens is harmful to your eye’s retina.

Computer screens and monitors emit what is known as “blue light”. Researchers suggest that the progressive destruction of light-detecting cells in the eyes  due to prolonged exposure to blue light could, therefore, contribute to age-related macular degeneration, which is a leading cause of blindness. … “It’s no secret blue light harms our vision by damaging the eye’s retina.” Source cited: Forbes Magazine

Astrophysics’ XIS-6040 X-ray machine with AI will limit the amount of time a screen has to be viewed. The technology identifies and alarms security personnel and outlines/highlights threats for easy recognition. This force multiplier technology tips the odds of detection in favor of security personnel, without the incessant need of keeping eyes glued to a screen.

Syntech SOLUTION’s® deep-learning algorithms effectively model the synapses of the human brain. The algorithms analyze visual images and extract an object’s characteristics to create a model that identifies an entire class of objects. The AI’s ability to identify objects, and alert security personnel, continuously improves as it is exposed to more examples; increasing accuracy and threat detection over time.

How to Run A Physical Security Risk Assessment on Your Business

With frequent warnings about hackers, digital theft, and general cybersecurity, it’s easy to overlook physical security as a concern of the past. But crime hasn’t gone completely digital and never will. Most companies wait until they face a major threat

It is with great pride that we announce Isotec Security, Inc. has been classified as an essential business by the city of Westminster, Colorado. The Isotec workforce and our clients have always known how important our products are to the